For the fourth consecutive year, the Financial Times, in conjunction with the research company Statista, has compiled the annual FT 1000 ranking of the most innovative and fastest growing companies in Europe between 2015 and 2018.

The Catalan company Steros Innovative GPA (Dlyte) is placed in number 76 in the overall ranking, is number four among industrial goods companies and the 6th Spanish company out of a total of 69. It growth rate of 157.7% exceeds by far the minimum growth rate of 38.4% demanded. 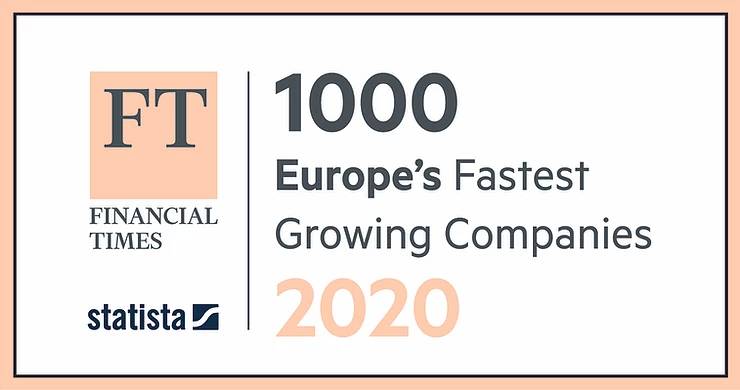 A total of 90 companies have been ranked for three consecutive years. Technology is dominating again with 189 industry participants.

Most companies come from Germany, followed by Italy, the United Kingdom and France, which account for 70% of the ranking. The city with the highest leadership continues to be London with the largest number of fast-growing companies, followed by Paris and Milan. Warsaw and Vilnius obtain the first place for the first time.

DLyte has revolutionized the market with a new polishing concept. It is the only automated system that improves the results of a manual polishing. DLyte is a technological solution that simplifies and standardizes the postprocessing of metal parts, improving the finishing results obtained with traditional polishing systems.

The innovation of DLyte is very disruptive for the metal sector, since it involves the automation of many finishing processes of metals, which have mostly been manual due to the difficulty to be automated without reducing the final quality of the product.

The patented technology used by DLyte has been awarded with the TCT Post-Processing Award 2018, as the best post-process for 3D metal printing.

During 2019 GPAINNOVA has opened a branch in

It is present in all five continents and has a distributor network in more than 20 countries.

Founder & CEO of GPA Innova since 2013 and from DryLyte, s.l. since 2016. Graduate Mechanical Engineer by the University of Girona.

More information can be found at Financial times

A complete report with case studies and analyzes of the FT 1000 Europe 2020 will be published on March 23.

/%postname%/
#
Sort Gallery
on
yes
yes
off
off
on
off
es
We use cookies on our website to give you the most relevant experience by remembering your preferences and repeat visits. By clicking “Accept”, you consent to the use of ALL the cookies.
Cookie settingsACCEPT
Manage consent

This website uses cookies to improve your experience while you navigate through the website. Out of these, the cookies that are categorized as necessary are stored on your browser as they are essential for the working of basic functionalities of the website. We also use third-party cookies that help us analyze and understand how you use this website. These cookies will be stored in your browser only with your consent. You also have the option to opt-out of these cookies. But opting out of some of these cookies may affect your browsing experience.
GUARDAR Y ACEPTAR
Funciona con